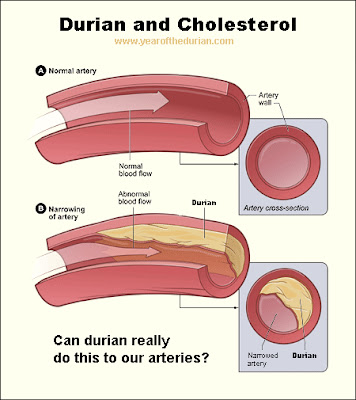 Lindsay and I meet a lot of
people who like durian but say they can’t eat it anymore. They ate
durian in their youth, but no longer do because of fears that the
fruit is high in cholesterol. Skeptical, I decided to look into it
and lay to rest this rumor for all those durian lovers who are
cutting out the king of fruits in pursuit of a healthy heart. Turns
out the truth of durian’s relationship to cholesterol is more
complicated than I anticipated, but the prognosis is still optimistic.


Is durian high in cholesterol? No. This part is simple: durian does not contain
cholesterol. None at all. The USDA National Nutrient Database lists
any amount of durian as containing 0.0 mg of cholesterol. For those
familiar with basic nutrition or biology this should come as no
surprise since no plants contain cholesterol. So, durian doesn’t
have any cholesterol and neither does any other fruit or vegetable.


Durian is not off the hook just yet, though, because
even without containing cholesterol food can affect a person’s blood
cholesterol levels. Dietary fat has an influence on the amount and
type of cholesterol circulating in our arteries. The scientific
community has conflicting opinions on the details of this
relationship, but the majority of evidence seems to indicate that
increased dietary fat intake results in increased blood cholesterol
levels (within a range).

Durian, with an average of 30 percent of calories
coming from fat, is a fatty fruit, but does eating it increase your
fat intake (and therefore your cholesterol)?  The answer is
‘yes’ if the alternative is a handful of bananas, plain rice, or a
plain potato, but more common meals like fried rice with chicken, a baked
potato with butter, or macaroni and cheese, are all likely to contain
more fat per serving than durian. For comparison, 72 percent
of calories in cheddar cheese are from fat and even a glass of 2%
reduced fat milk provides 35 percent of its calories from fat.

Not that all of this fat is
necessarily a bad thing. Cholesterol is vital to good health. While
you don’t want your cholesterol levels to be too high, extremely low
cholesterol leads to its own set of problems. Eating a moderate
amount of fat can help to keep your cholesterol in the healthy range,
between 160 and 200 mg/dL.
Total blood cholesterol is, however, only part of the story.
Perhaps more important for cardiovascular health are the amounts of
high density lipoprotein (HDL) and low density lipoprotein (LDL)
circulating in your blood. HDL is known as ‘good’ cholesterol, and
LDL is commonly regarded as ‘bad.’ Most people with cholesterol
issues will benefit from lowering LDL and increasing HDL. How do
you do that?

Most medical and public health literature advises us to limit our consumption of fats and especially of saturated fats which are accused of causing a rise in total cholesterol. My research into the relationship between dietary saturated fat and cholesterol levels has not lead me to easy conclusions. It is a complicated subject, and one on which many disagree. I will attempt to paint a picture of the complexities while respecting the prevailing precautionary recommendation.

It is
worth considering the difficulty of establishing the relationship
between serum cholesterol and any one nutrient. To reduce saturated fat
intake without reducing total calories requires increasing some other
nutrient, so it is not possible to claim that limiting saturated fats
reduces serum cholesterol without considering the substitute (or
otherwise showing the effect wasn’t the result of reduced total
calories).

The
same study also found that while lauric acid, a saturated
fat, increased total cholesterol, it achieved this mostly
through an increase of HDL, the ‘good’ cholesterol. Lauric acid is not especially prevalent in durian, but this finding does suggest the current stance against saturated fat deserves further consideration.

The standard advice shouldn’t be casually disregarded, but there is a growing field of researchers who
disagree with the commonly held belief that saturated fat causes
unhealthy cholesterol levels. These thinkers also tend to question
the causal relationship between cholesterol levels and heart disease,
citing the greater positive correlation of other conditions such as inflammation. If you want to learn a great deal more, consider my recommended
reading list below.

Until the evidence is sufficient to persuade the majority to rewrite the books, it may be prudent to limit most dietary
saturated fats and when necessary reduce their intake by substituting
with monounsaturated and polyunsaturated fats. With that in mind, let’s
take a look at the saturated fat content of durian and how the king of fruits can
fit into a healthy diet.

The Fat of the Matter


The fatty acid composition of durian is different for
each variety, but there are enough similarities to draw a general
picture. The USDA lacks detailed data on the breakdown of durian’s
fat, but an independent study analyzing the fatty acid content of
four Malaysian cultivars (D-24, D-2, D-8, D-66) found a fair amount
of saturated fat, between 58 and 65 percent of total fat (Berry,
1981).

That’s high compared to well-known sources of
monounsaturated fat like olive oil, which is only 14 percent
saturated, and almonds (7%), but still lower than butter (68%), and
coconut oil (86%). Of course, only 5 percent of a durian is fat; almonds are 49 percent, butter 51 percent, and
olive oil and coconut oil are 100 percent fat. Point being you can
eat considerably more (10 to 20 times more!) durian and consume the
same amount of saturated fat found in a lesser amount of these higher
fat foods.
The American Heart Association recommends limiting saturated fat to 7 percent of daily calories. The USDA Center for Nutrition Policy and Promotion suggests limiting saturated fat to 10 percent of daily calories. On a 2000 calorie diet, 7 percent allows
16 grams, and 10 percent allows 22 grams of saturated fat. To reach 16 grams you would have to eat about 450
grams of durian. Monthong, one of the fleshiest durians, is 30
percent edible. If we use that figure (which is on the high end to be
safe), we will find 450 edible grams in a 1.5 kg durian. The 10% mark
of 22 grams saturated fat is found in 2.0kg of durian, by this same
estimation.

Luckily, it seems the recommendations for achieving healthy
cholesterol levels do not preclude eating durian. They may, however,
indicate moderation of durian consumption is wise for people with
existing cholesterol issues. For the rest of us, I think it is
probably safe to pig out.

If your diet is otherwise low in
saturated fat, you can safely eat a 1.5 to 2.0 kilogram durian, even
the fleshiest varieties with the highest saturated fat, every single day and fall
within the guidelines for a heart healthy diet.
References:
Recommended Reading (Alternative Opinions on Saturated Fat):
Disclaimer: This article is for general education
purposes only and should not be regarded as medical advice. If you have a
cholesterol condition consult a licensed physician.